Things lately have been, well, a little nuts. I'm knee deep in the Fall semester of my Senior year, and while it feels great to be so close, I feel like I'm going to have to drag my body across the finish line. The reason I'm so exhausted is probably because I started working this semester. I was lucky enough to actually snag a job at the university I attend working in their Center for International Education. I'm the publications assistant, which means I basically put the newsletter for the center together, formatting, writing articles, etc. It's a great opportunity and I was glad to take the position, however, I am ALWAYS on campus now. EVERY SINGLE DAY from 9 till 7 on some days, ugh. I know that might not sound like a lot, but it is hard considering by the time I get home there's only a few hours left before Josh goes to bed (he gets up at 4-5 a.m.) so it's like the weeks don't even happen anymore. Now I really know the meaning of the phrase "livin' for the weekend." It's good though, it's all good stuff, just a lot of it. I'm looking forward to a nice long break in December. We're going home for Christmas for the first time in three years, and while I'm excited about it, it will be a little bittersweet for a multitude of reasons. Oh well. Ok, well here's an update on stuff that's been going on lately: 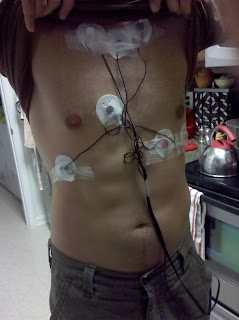 Last month we got to deal with a super fun scare. Josh was told he had a heart condition called PAC (premature atrial contractions), even though we were pretty sure it was nothing serious, he had to wear a heart monitor for a day or two and then we had to spend an entire day in a cardiologist's office. poor guy, he got the whole gamut of tests ran on him. Thankfully his heart is all clean for now. Unfortunately, it's just one more thing we have to worry about and it was a hard thing to swallow, my husband isn't invincible. 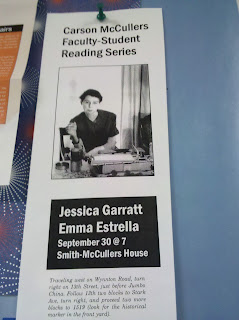 I was honored to be chosen for the Carson McCullers Faculty-Student Reading Series. I read about ten poems. It was a little nerve-wracking since it was my first full reading, however it seemed that it went quite well. I got a lot of great feedback from everyone and it made me very excited to start moving forward with my poetry. 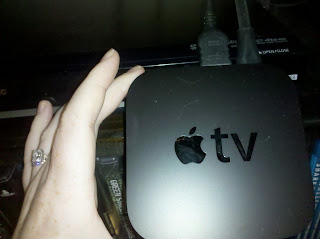 We got an AppleTV. I am in love with it. I want to have its children. I want to dance with it in fields of sunflowers. 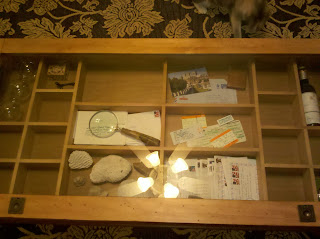 This is my (early) anniversary present from Josh. It's a coffee table from Pottery Barn and it's like a little mini museum that I can fill up all my little treasures. Currently displayed are letters that Josh and I have written over the years, rocks from various travels to places like Mexico and Afghanistan, ha. There's also the bottle of wine Josh and I drank on our engagement night, that was a daaaang expensive bottle, so...I kept it. There's some postcards and tickets from when I lived in England and other various things. I look forward to filling it up with cool stuff that would otherwise be deemed junk! I think that perhaps this was Josh's secret scheme in buying me this, get all my knick-knacks off the shelves. 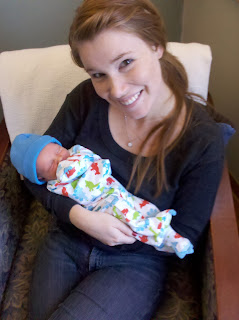 Ethan James Keller, the son of our dear friends Jeremy and Ally Keller, was born on October 7. We love him so much already and he is certainly a bright spot in some otherwise frustrating months for everybody. It's amazing how refreshing the birth of a new baby is, so hopeful in the midst of what feels like a hopeless world.

The Giants are in postseason!!!! It's been seven long years but the boys in orange and black are back! Josh and I have had such a fun time watching the games on t.v. but it was even more exciting in person! I took him to game three of the NLDS againt the Braves in Atlanta on Sunday October 10th. it was his (early) anniversary gift and he was stoked. it was an incredible game to be at. the Giants came back from behind in the ninth inning with two outs! I'm surprised I even had nails left after that game, what a roller coaster! Now we just have to beat the pants off the Phillies and mosey on over to the WORLD SERIES! So exciting.